Mathematica vs. Python in my Computational Physics course

This past year I taught two sections (fall and summer) of Computational Physics at UFV, which is quite a rare thing to happen at a school where we typically run 3rd and 4th year courses every other year. The course was structured so that students would get some initial exposure to both Python and Mathematica for the purposes of physics-related computational tasks, and then as the course went on they would be given more and more opportunities to choose between the two platforms when completing a task. This post looks at the choices made by the students on a per task basis and a per student basis.  From a total of 297 choices, they chose Mathematica 62.6 ± 2.8% (standard error) of the time. Two things to note. First, there is a small additional bias toward Mathematica because two of the tasks are more Mathematica-friendly and only one of the tasks is more Python-friendly, as will be discussed. Second, there were students coming into the course with some previous experience using Mathematica or a strong computing background in Java or C++ and those students usually gravitated toward Mathematica or Python, respectively. But some students did the opposite and took advantage of the opportunity to become much more familiar with a new-to-them platform and tried to do as much of their work as possible using the new platform.

The general format of the course is that, for the first three weeks, the students are given very similar tasks that they must complete using Python and Mathematica. Examples include importing data and manipulating the resulting arrays/lists to do some plotting, and basic iterative (for/do) loops. Each of those weeks there is a third task (1.3 and 2.3 in Figure 1), where they build on those initial tasks and can choose to use either Python or Mathematica. In subsequent weeks, being forced to use both platforms goes away and they can choose which platform to use.

Figure 1 shows their choices for those tasks in which they could choose. In week 3 they learn how to do animations using the Euler-Kromer method in Mathematica and using VPython. Although Mathematica works wonders with animations when using NDSolve, it is really clunky for Euler-Kromer-based animations. Task 4.1 is a mini-project (examples) where they animate a collision and since they have only learned how to do this type of thing using Euler-Kromer at this point, VPython is the much friendlier platform to use for the mini-project. But as you can see in the third column in Figure 1, some students were already quite set on using Mathematica. Conversely, for tasks 8.2 and 8.3, Mathematica is the much more pleasant platform to be using and you can see that only a few diehards stuck to Python for those ones. 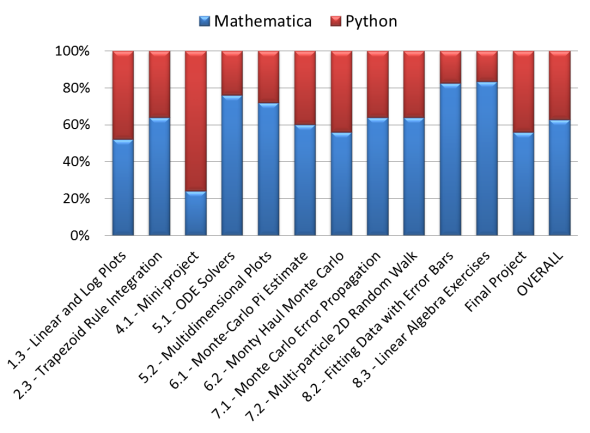 Figure 1. Comparison between Mathematica and Python usage by task. Each column represents submissions from approximately 25 students (typically 23) or student groups (typically 2). There is some variation in the total counts from column to column due to non-submissions. Final projects were done individually, but for each of the two groups, members made the same choice with regards to platform for their final projects. 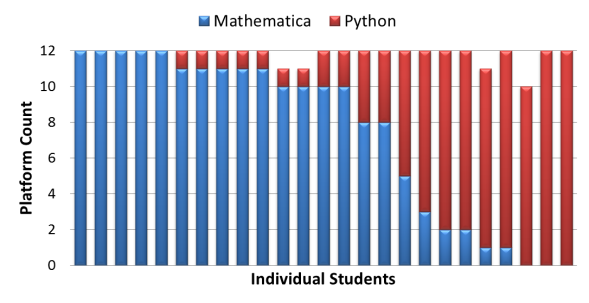 Figure2. Comparison of Mathematica and Python usage on a student by student (or group by group) basis. They have been put in order from maximum Mathematica usage to maximum Python usage. Variation in the total counts from column to column is due to non-submissions. Final projects were done individually, but for each of the two groups, members made the same choice with regards to platform for their final projects.

After the course was completed, I asked the students for some feedback on various aspects of the course and one of the questions I asked was

How did you find that the mix of Mathematica and Python worked in this course?

I ended up being quite happy with how the mix worked. I learned a ton in the process because I came in being only mildly proficient with each platform. I was also really happy to have the students come out of the course seeing Python as a viable alternative to Mathematica for a wide range of scientific computing tasks, and conversely getting to see some places where Mathematica really excels.

4 Comments on “Mathematica vs. Python in my Computational Physics course”

I'm a tenure-track Instructor in the department of Physics and Astronomy at the University of British Columbia in Vancouver, Canada. My research is in the field of Physics Education Research.